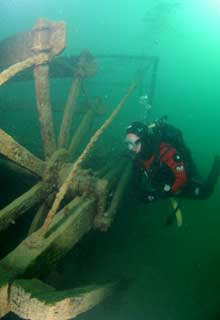 Underwater archaeologists said Monday that they have found a virtual time capsule of life during Canada's Klondike Gold Rush: a sunken Yukon River stern-wheeler so well-preserved that researchers can document the last minutes of the five-man crew as well as their life aboard the primitive cargo-hauler.

The door of the steam boiler on the A.J. Goddard was open, and slightly charred wood found inside suggested the crew was trying to build up a head of steam, perhaps to break loose from an ice jam.


An ax remained on the deck after one crew member hefted it to chop the rope used to tow a barge, a sign of their frantic attempts to escape the ice floe.


Three men perished in the 1901 sinking, according to news reports at the time, and two were found clinging to the ship's wheelhouse in the icy lake.


The bodies of Capt. Charles McDonald, cook Fay Ransome and fireman John Thompson washed ashore. Engineer Stockfedt and crewman Snyder, whose first names are unknown, were rescued by a trapper camping nearby.

The Goddard, which had been disassembled and laboriously carried over mountain passes to be reassembled on the shores of Lake Bennett at the headwaters of the Yukon, foundered in a winter storm, sinking in 40 feet of frigid water in Lake Laberge, about 40 miles north of Whitehorse. Its precise location had been a mystery until it was discovered last summer in a survey of gold-rush-era wrecks in the lake.

The ship "is literally a frozen moment in time," with nearly everything on board in the same place it was when the ship went down, said underwater archaeologist James P. Delgado, president of Texas A&M University's Institute of Nautical Archaeology and a member of the team that found the Goddard.

"The Goddard is a very important reminder that ordinary people get caught up in events that are bigger than themselves. It's a rare window into the past where we can truly connect with these five guys, the reality of the gold rush and trying to make a go of it in difficult times," Delgado said.


The Klondike Gold Rush was triggered in 1896 when members of the Tagish First Nations tribe discovered gold in the Yukon River valley in northern Canada. The remote location made it difficult for potential miners to reach the site. The most common route was to travel by rail to the Alaskan towns of Skagway and Dyea, cross the Coast Mountains through the Chilkoot Pass to Lake Bennett on foot, then build a craft to journey more than 500 miles downstream to Dawson City, near the gold strike.


A.J. Goddard, an engine designer from Iowa, saw a different way to make money from the gold rush. He commissioned the construction of two flat-bottomed stern-wheelers (required because of the shallowness of the river and its rapid flow) in San Francisco and Seattle. The crafts were carried in bits and pieces through the narrow White Pass in the winter of 1897, a task that took Goddard and his wife the entire season.
But that spring, the couple established the first steamboat link between the gold fields and the Pacific coast via the railway to Skagway.
Eventually, hundreds of small ships and boats were servicing the route, but most of them were eventually abandoned and destroyed.
Doug Davidge, an amateur archaeologist at the Yukon Transportation Museum in Whitehorse, had been searching for the Goddard for two decades and recently had been participating in the gold rush survey.
Last summer, the survey team was performing a side-scan sonar survey of Lake Laberge when, on the last day of the trip and the last scan of the lake, they saw a promising image in the corner of the screen.
Davidge went back the next day in a motorized canoe and dropped a camera over the side. He discovered a stern-wheeler that he suspected was the Goddard.
This spring, not 48 hours after the lake ice melted, the team began diving to the wreck. Davidge was the first to see it and the first to place his gloved hand on the rail.
"The ship is upright. It pretty much sank straight down," Delgado said.
A canvas hose running to a pump suggests that the ship was taking on water.
The framework of the canvas tent the crew lived in on deck remains. Their stove was on deck as well, and a cook pot was lying in the mud alongside the wreck.
They had a forge on deck for repairs -- the tongs were still on it. Their tools had spilled out of a canvas bag across the deck and into the mud. A running light on the side of the ship that would have been lighted by a candle was still in place.
A crew member's coat and shoes were left on the deck, perhaps shed as he attempted to swim for his life.
The forward hold was full of firewood, while the rear hold was full of bags, maybe of coal, Delgado said. What appears to be one of the men's carpetbags was in the hold, but the team has not yet retrieved it. The team hopes it will contain letters or other identifying materials.
The team is working with the Canadian and provincial governments to preserve the site. They will return next spring as soon as the ice clears again to retrieve some objects for display in the Yukon museum.
The project was funded by the Yukon government and the National Geographic Society. 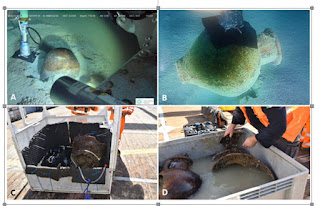 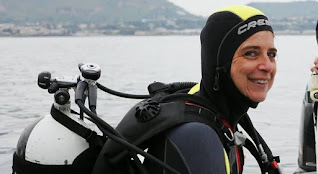